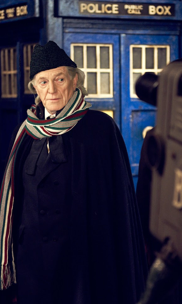 The BBC have announced details of a number of television shows celebrating the Doctor Who 50th Anniversary. Not only do we have the genesis of Doctor Who drama An Adventure in Space and Time (details HERE), there's much more to come! Check out the details below.

• BBC Two lecture by Professor Brian Cox (The Power of Three) on the science behind Doctor Who.

• BBC Four will air a re-run of the first ever story. The four episodes are being shown in a restored format, not previously broadcast in the UK.

• BBC Two's The Culture Show will present Me, You and Doctor Who, with lifelong fan Matthew Sweet (name-checked in The Crimson Horror) exploring the cultural significance of Doctor Who.

• BBC Three will air several programmes whilst Doctor Who: The Ultimate Guide is a starter for those less familiar with the show.

• Who Is The Doctor? is a 90-minute documentary from BBC Radio 2 using newly-recorded interviews and exclusive archive material.

UPDATE: Check out the full details of all the BBC's programming on television and radio HERE.

For details on the Doctor Who 50th Anniversary Special, The Day of the Doctor, click HERE.