An Adventure in Space & Time interviews 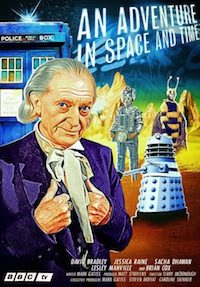 The BBC has released some interviews from the cast and crew of the upcoming drama, An Adventure in Space and Time. Check them out below. First up is an interview with the film's writer, Mark Gatiss (The Unquiet Dead, The Crimson Horror).


What can viewers expect from the drama?
Principally, it's the story of how Doctor Who was created, so we concentrate on the very beginnings and the first few episodes. There are lots of treats for the fans but it's also the story of William Hartnell, the first Doctor and how the part transformed his life.

Why did you want to tell this story?
I'm a life-long Doctor Who fan and the origins of this beloved show have always fascinated me. But, above all, I wanted it to strike a chord on a human level. These were brilliant, complex, talented people making something revolutionary. And, in William Hartnell, we have the very affecting story of a man redeemed by the role of a lifetime who then, sadly, had to let it go. I think we can all relate to something like that in our lives.

What was the casting process like? Did you set out to find such good lookalikes?
I'd had David Bradley in mind for some years but it wasn't simply a question of a good likeness! David is such a fine and delicate actor, I knew he'd find something wonderful in the part. With everyone else, I stressed that we must first and foremost get the right people for the job. But it turned out the right people also bear the most amazing resemblances to the originals! Costume and make-up, of course, played a huge part in that. 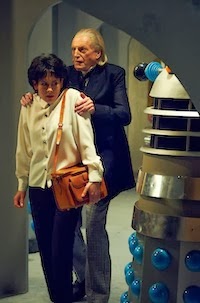 Could you explain a little bit about the research process?
Doctor Who is probably unique in terms of TV shows in that its history has been exhaustively researched for years. Happily, this means that there are lots of interviews existing with people who are no longer with us. I'd wanted to tell the story for years – I sort of grew up with it. How no-one wanted the Daleks. About the first episode going out just after JFK was shot. But I wanted to get deeper than just the details of production and find the human story. I conducted new interviews with a lot of the original cast and crew. They were all hugely enthusiastic and very helpful.

Did you uncover any facts or information that you didn’t previously know as a Doctor Who fan?
A few bits and bobs but, as I say, most of it is very well documented now! It was very touching, though, to talk to people about a part of their loves that was often very happy and to discuss people long gone.

There were so many people involved in the show’s beginnings, why did you decide to focus on the four central characters of Hartnell, Newman and Lambert and Hussein?
I had to focus it down. Simple as that. This is a drama, not a documentary, and though it's extremely painful to have to leave out some people who played a huge part, it makes dramatic sense. You simply can't do everyone justice in 90 minutes. For instance, the story of how Terry Nation and Ray Cusick created the Daleks is almost a film all on its own! Jeff Rawle plays Mervyn Pinfield, who was the Associate Producer, and his character sort of absorbs several others including Donald Wilson and the brilliant David Whitaker – the first script editor - whose contribution was immeasurable.

Set in the 1960s the drama brings to life that era through the costumes, hair and make-up and the sets, including the first ever TARDIS console. What was it like being on set?
It was extraordinary. To see the original TARDIS recreated genuinely took my breath away and everyone who came to the set had the same reaction. It was frequently quite uncanny. We used some of the original Marconi cameras and, on the black and white monitors, seeing David, Jemma, Jamie and Claudia was like looking back through Time. Spooky and very moving. 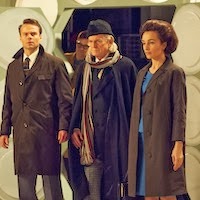 Finally, what do you hope audiences take away from the drama?
This is my love-letter to Doctor Who! In this 50th anniversary year, I hope fans will enjoy and be thrilled by it and all the kisses to the past it's laden with. But my greatest wish is that it appeals to people who know very little or nothing about Doctor Who and see the struggle of talented people (almost) accidentally creating a legend!

Read Blogtor's interview with Mark Gatiss HERE. An Adventure in Space and Time will air during the week of Nov 16-22 on BBC Two. The ninety minute special stars David Bradley (Dinosaurs on a Spaceship) as William Hartnell, read what he has to say below.

"It has to be said, after some initial reluctance to do something for children’s TV, I think he [William Hartnell] was quickly convinced that it was the right thing for him to do. He felt quite insecure about it as it was new territory for him, but once he started he embraced the whole idea of the part. I know he had a reputation at times for being cantankerous and rather difficult and one has to play that."

"It was clear from research and hearing his colleagues talk about him that he was a perfectionist. He demanded a lot of himself and he expected everyone around him to show the same level of commitment. He was invited to school fetes in the full outfit and I thought how brilliant and touching that was. It’s clear that he absolutely loved it and found it very hard to let go. That’s an element that Mark Gatiss brings out in the script."

"I think maybe when people joined the show later, different directors and different actors, if they showed a lack of commitment then it would upset him and he would let people know that’s how he felt. There are moments of sadness in Space And Time where he becomes aware that he hasn’t got the strength to do it anymore."

"It’s been one of those great jobs and an experience I’ll always remember. We’re honouring something that’s been part of television history for 50 years and I hope I’ve done justice to an actor that I admire greatly."

Read more interviews from the cast HERE. For the latest pics and news on An Adventure in Space and Time, click HERE.