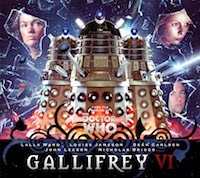 Daleks on Gallifrey! Big Finish opt to wrap up the continuing adventures of Romana, Leela, K9 and Co. by going big, bold and (Dalekanium) brassy.  It’s an effective means of luring in the unseasoned listener.  If your first introduction to the Gallifrey audio series was this one (as it was mine), then it’s a great place to start.

Whilst they’ve always been a visually arresting icon in Who history, the sound of the Daleks has been just as important in maintaining their hold on public imagination. Big Finish excel in presenting an immersive soundscape for the listener, punctuated by the harsh, metallic tones of Nicholas Briggs’ array of Skarosian voices.

There’s a LOT of back-story to the Gallifrey series, having run on and off over a nine year period, pre-dating the revival of Doctor Who on TV.  This covers a dizzying array of references to The Axis, the Pandora Devastation, the Dogma Virus and events on Etra Prime. I approached this series knowing next to nothing about those. Thankfully the fast-pace of Extermination, the first in this three-part series, throws the listener straight into the action as Skaro’s finest sweep through the Time Lord corridors of power, sending our heroes running down those same corridors. 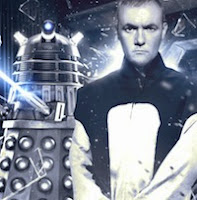 Along the way we discover that we are in fact on an alternate Gallifrey, absent time travel capability and enormous collars; its energies instead having been diverted into making weapons.  Handy, of course, when faced with a marauding force of Daleks.

Whilst the listener might have little doubt that Leela will cheerfully take up arms in battle, surely not so with Romana? All the more shocking then, when she demonstrates a willingness to do so, and inflict torture on an injured Dalek, a very effective hint at the darker times she’s had to endure. By contrast, in a similar face-off with a vulnerable dalek, Leela’s preference is to give it the opportunity for a fair fight.

Lalla Ward and Louise Jameson are both on excellent form throughout, creating a wholly believable sense of deep friendship and trust between their respective characters, with strong support from Sean Carlsen as Controller Narvin, the spider at the centre of the Celestial Intervention Agency web. And I have to say that it’s particularly heartening, as one who struggled all those many years ago to come to terms with the idea of Leela tamely marrying off with Random Gallifreyan Guard, to hear her character gleefully throwing herself back in the fray again.

Having seemingly defeated the Dalek threat, Romana, Leela and Narvin discover a route (via The Axis) back to their version of Gallifrey, devastated by the effects of the Dogma Virus, etc... During Renaissance” and Ascennsion, parts 2 and 3 of this series, they are joined by Juliet Landau as an equally strong character.  It hardly seems necessary to employ a SPOILER ALERT at this point given the cast listings, but we soon discover that there’s more than one Romana at large on Gallifrey.  And so “future” Romana reveals her plan, having travelled from a point in Gallifrey’s future, bearing the gift of a ready made, rebuilt Capitol which she offers to have “grafted” on to the shattered current version, to speed up Gallifrey’s return to prominence. 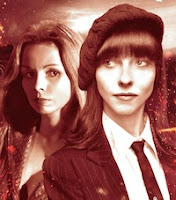 Elements of televisual Gallifreyan history are liberally referenced, with the Romanas working to maintain the transplant of the new Capitol upon Gallifrey by balancing the transduction barriers against the Eye of Harmony and…cough…that sort of thing.

The story manoeuvres into political and diplomatic territory then, as Romana II attempts to quickly capitalise on the rebuilt Gallifrey by declaring it open for business and engaging with other time travelling races.  However the cracks begin to show and it soon becomes apparent that the brave new Gallifrey has been built on shaky foundations: in quick succession Romana III becomes president, banishing Romana II (via Type 40 TARDIS). Then, echoing the events at the end of The Deadly Assassin, the Eye of Harmony starts opening.

Another SPOILER ALERT coming up as, battling to close the Eye, Romana II is unable to hold back her resultant regeneration. We soon discover, however, that she has in fact fallen through a Matrix door. If the previous two episodes provided echoes of The Invasion of Time and The Deadly Assassin, the events of Ascension owe a considerable debt to The Trial of a Time Lord: The Ultimate Foe, as Leela, Narvin, Romana III and a mysterious stranger fight for survival in a decaying Gallifreyan Capitol, while Romana II finds herself in yet another version of Gallifrey, soon joined there by K9.

I, for one, was glad of K9’s presence, to explain just who was in the Matrix and where the doors were.  John Leeson adds his dependable support to the cast, and it’s a treat to hear K9 get his chance FINAL SPOILER ALERT to take on the Daleks as they appear once more, having hidden in the Matrix.

Through the course of three very entertaining episodes of Gallifrey VI, it’s clear that there are a lot of plot threads to satisfactorily tie up, going back over the nine or so years of the entire series.  A tall order, and one that’s possibly just slightly out of reach.  There is however much to commend about this new release.  Those who enjoy sinking their teeth into a generous serving of continuity won’t be disappointed.  But the conviction of the acting, the easy familiarity between the regular characters and the strong performances of Mesdames Ward, Jameson and Landau provide much for the newer listener to enjoy.

And finally when it seems that the story has reached its conclusion, there’s a cunningly placed link back into the established Who-niverse. You’ll have to listen to find that one out though. No spoilers…

Big Finish round off the Gallifrey VI set with cast and crew interviews, drawing together their accounts of the making of the entire series. It’s an enjoyable account, from a group who’ve clearly enjoyed creating a rather special part of the Big Finish range.

BLOGTOR RATING 7/10
Thanks to Big Finish