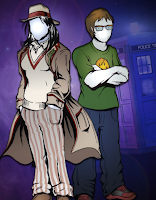 Who Are You Supposed To Be? is a light-hearted comedy from Australian writer, Keith Gow, workshopped by the London team of Cameron K McEwan, Emrys Matthews and Jennifer Lusk featuring a very strong Doctor Who element. The play premiered at the Edinburgh Festival Fringe earlier this year and is appearing in London next month - buy tickets HERE.