REVIEW: The Doctor, The Widow & the Wardrobe/The Snowmen OST

The Doctor, The Widow & The Wardrobe
and The Snowmen
Original Television Soundtrack by Murray Gold

This year, despite a lack of new Doctor Who for its 50th Anniversary, we have been spoilt on the soundtrack front. Barely two months ago we were gifted with a beautiful Series 7 soundtrack, bidding adieu to the Ponds and saying hello to an impossible girl (review HERE), and now this opportunity to revisit the 2011 and 2012 Christmas Specials in almost as much detail as the A Christmas Carol release (review HERE).
Murray Gold is one of the few long-standing elements of "Nu-Who" that really never fails to deliver. Over the growing number of soundtracks, Murray has developed a true Doctor Who language, treating us with moments of reminiscence through little musical motifs leading us through the series. 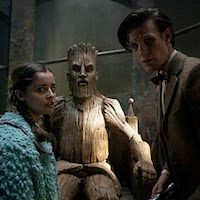 He has used this to its utmost in the music for the soundtrack’s first half, the music from The Doctor, The Widow and The Wardrobe - a rather unloved, somewhat misremembered Christmas episode, I feel,  shoved to the back of most Who fan’s memory.

But Gold throws you right into the deep-end with Geronimo, welcoming you back into the world of the mad man with his box. Leading through to Madge’s Theme, a heartfelt and full piece building from a solo piano to beautiful choral flourishes from the Crouch End Festival Chorus. The (arguably) unsung hero of the Doctor Who soundtracks, orchestrator Ben Foster really gets his chance to shine in Baubles, flexing the BBC National Orchestra of Wales’ muscles through a real ride of a piece.
After leading you through the epic and haunting introduction of The King and The Queen the first story comes to a close with Flying home for Christmas and Safe Landing. With patterns reminiscent of Amy’s Theme and The Mad Man With A Box, they interlace The Doctor’s own loss and loneliness with the pain of a grieving family. I’m sure if you listen hard enough you can hear elements of Doomsday and A Dazzling End, tying every story of The Doctor’s together.
The reminiscence of The Widow and The Wardrobe is counteracted by the crisp, fresh voice of The Snowmen, welcoming you in through the dark wit of The Voice In The Snow; icy cool, the threat the Doctor is facing feels all too close.

The episode itself bounded between the creepy and the downright bonkers and the track order perfectly matches that, giving you Psychotic Potato Dwarf - an oddly sexy slow tango of a piece for Strax, the guitar reverb producing the full depth of the character’s ludicrousness.
We are then introduced to Clara... Again! And yet again thrown right into the deep end, the few moments of rest are a welcome chance to get to know who she is. Clara in the TARDIS is a bright, hopeful theme for her, purposefully given a new and clean sound, her history is kept as secret from us as it was from The Doctor. Growing on this, Hello Mates is a childish game of a piece with a heavy dose of threat.
The oboe is beautifully used in One Word, with plenty of Harold Kloser’s The Day After Tomorrow style. Then Murray cheekily parodies David Arnold and Michael Price’s Sherlock theme in Sherlock Who?, which I’m sure will be the piece that makes everyone’s little fan-hearts flutter.

Closing the album is the epic Whose Enigma, where the Christmas warmth is unmistakable. But this album is not one that you can only listen to when there's an over-cooked turkey steaming on your table with a hundred family members you can’t quite remember sitting around it. This will quite happily sit with the rest of your Doctor Who soundtracks in the best possible way. It’s difficult to imagine the show without Murray’s score soaring over it, and lets hope we'll never have to!

One of the joys of the albums that focus on single stories is their ability to take you through the journey of each episode in a far smoother, detailed way. It’s the LP equivalent to the "Greatest Hits" albums of the previous series soundtracks - a real pay-off for the fans and allows Murray some much deserved indulgence.

BLOGTOR RATING 9/10
Thanks to Silva Screen