For me, Kinda neatly demonstrates what makes Peter Davison's Doctor so lurveable: he potters into a situation, creates problems for his companions (or they create them) and bumbles along trying to save himself and his chums. Not trying to save the or even a world.

Indeed, his arrival has instigated this story - the appearance of the Mara - so it's only right that he should clean up after himself. What I appreciate most about Kinda is the layered storytelling that's going on. Sure some people, including the writer of the story (pah! what does he know??) will have you believe that it's about Buddhism but, for me, the main theme of the story is drug abuse. 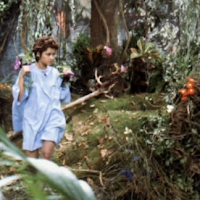 There is another thread of failed colonialism, which starts very strongly and illustrated so expertly in Richard Todd's performance (a neat slice of intertextual casting, having been so very British in The Dam Busters) who goes from stout Englishman to wide~eyed loon, reflecting the fall of the Empire. The indigenous people of Deva Loka, the titular Kinda, are the "primitives" being introduced to civilisation. But, of course, they have all the power here.

Anyway, back to the drugs, man.

The "dream" sequences featuring Tegan, so trouser~tighteningly well-played by Janet Fielding, and Dukkha evoke the typical Eighties youth orientated drug scare tactics; made~up with red eyes (and mouth, no less). Eerie scenes, lit and digitized like a David Bowie video, show the addiction spreading from one addict to another. I mean, could the snake be any more like a needle? It carries the "drug" (the Mara) from one user to another. Once "infected", Tegan moves to spread her euphoria to the rest of the population. 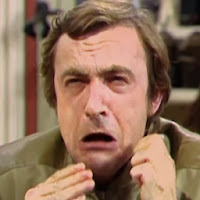 Of course, when discussing the cast, I have to mention Simon Rouse (pictured right), whose Hindle doesn't need drugs to act like a madman. Rouse delivers simply one of the best performances in the history Doctor Who. If his spine~chilling cry of "Mummy!" doesn't have you gasping then his utter breakdown with the line "You can't mend people!" will have you wondering why he squandered his life in The flippin' Bill (no offence, however, to all the wonderfully talented people involved in that show, *coughs*).

An amazing and truly memorable portrayal of an unhinged character without taking it too far and yet, at the same time, taking it so far. Like a number of stories in this Top Ten, Kinda is one with an astounding guest performance.

The rest of the cast are no slouches either with some very strong female characters in there such as the double team of Karuna and Panna (played so effectively by Mary Morris) and the effervescent Nerys Hughes as chum-of-the-Doctor, Todd. She made for a very sympathetic and interesting companion for the Time Lord, almost his equal. (And did I detect some kind of non-scientific chemistry between them? I think I did.) A great shame that Hughes never returned, a formidable companion she would have been.

Then there's the brilliant set design from the aforementioned nihilistic and barren nightmare sequences to the luscious yet otherly world of Deva Loka. It may not be up to the incredibly high standard of Planet of Evil, also in this Top 50, but, despite the studio lighting, video format (as opposed to Evil's film seqences) and the odd studio floor being visible, it's still a gorgeous and alien world. Those wind chimes (and their sound) still give me the willies.

Kinda haunted me as a child and the imagery lived with me for many, many years. And now, as an adult (well, almost), I can savour the many nuances of the production, perfect performances and the layered storytelling taking place. Oh, and it's got a young Johnny Lee Miller in it - what more could you possibly want!