The Day of the Doctor Cinema Screening Details [UPDATE] 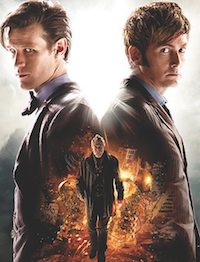 Hundreds of thousands of fans across the UK, Ireland, US, Canada, Germany and Russia will gather to watch on the big screen at the same time as millions of TV viewers worldwide

BBC Worldwide today announces that the special 50th Anniversary episode of Doctor Who will also be screened in 3D in cinemas across the UK, Ireland, the US, Canada, Germany and Russia at the same time as the UK TV broadcast on BBC One on 23rd November 2013, with more countries to be confirmed within the next few weeks.

In addition to the global TV broadcast, hundreds of cinemas in the UK and around the world are also confirming their plans to screen the hotly anticipated special episode simultaneously in full 3D, giving fans another unique opportunity to be part of a truly global celebration for the iconic British drama series. 216 VUE, Cineworld, Odeon, BFI and Picturehouse cinemas in the UK and Ireland have already confirmed their participation, with tickets for the anniversary screening set to go on sale this Friday October 25th at 9am. Locations include London, Birmingham, Belfast, Dublin, Liverpool, Cardiff and Edinburgh.

Internationally, German, Russian, American and Canadian fans will gather in cinemas to enjoy the simulcast release, approximately 30 cinemas in Germany will screen the special and up to 50 theatres will debut it in Russia. The celebrations will cross time zones travelling over the equator to New Zealand and Australia where fans will have a choice of 106 cinemas across both countries to view the episode in 3D on the big screen on the 24th November following the simulcast TV broadcast earlier in the morning.

Visit dayofthedoctor.com for all the info on the special

UPDATE: Fans in the US can enjoy The Day of the Doctor in cinemas too. It will screen in 11 cities on Nov 23 (details HERE) and then from Nov 25 it will screen in over 300 hundred cinemas.