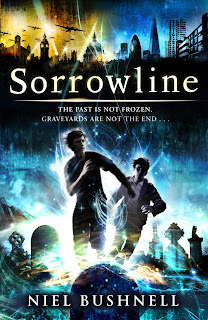 The producer of the recent excellent animated episodes on the The Ice Warriors DVD, and long-standing contributor to the Doctor Who DVD range, Niel Bushnell, has written a brilliant time-travel fantasy adventure.

Sorrowline is published by Andersen Press and follows the adventures of 12-year-old Jack Morrow who discovers he is a Yard Boy – someone with the ability to travel back in time through Sorrowlines, the channels that connect every gravestone with the date of the person’s death.

"I've been fascinated with time travel since watching Doctor Who as a small child," Bushnell explains. "The idea of going back in time is something I've always wanted to explore. In Sorrowline Jack finds himself in 1940s war-torn London, with his then-teenage grandfather, Davey, and together they discover a secret world of undead knights, mind readers and creatures from other realms. Jack's mother died when he was eight, so the notion of trying to change his own past is something that eats away at him throughout the story."

Sorrowline has already found international success and has been published in Germany, with Brazil and Thailand soon to follow. A sequel, Timesmith, will be published in the new year - pre-order HERE.

Sorrowline is available in paperback and e-book now. You can read an extract from it on Niel's website here: http://www.nielbushnell.com/books/sorrowline/