Who at Fifty - Manchester festival 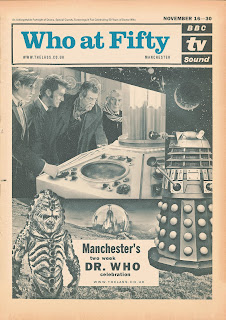 Doctor Who is fifty years old on the 23rd November, 2013 and four of Manchester’s best loved venues are teaming up with a host of events over two weeks to help you celebrate!  New drama, live episodes, screenings, poetry and a great big party for Doctor Who’s 50th birthday on Saturday, 23rd November.  With more goodies than you can shake a sonic screwdriver at, it’s truly bigger on the inside!

THE ART OF WHO kicks things off on Saturday, 16th November with your chance to meet some of the amazing talents behind the Doctor Who comic strip – currently the Guinness Book of Records World Record holder for the longest running tie-in comic strip.  You’ll see rare art, chat to the creators and maybe buy some original art if the fancy takes you!

Another key creative Who at Fifty is also delighted to welcome is ANDREW CARTMEL who will be in conversation at the Lass O’Gowrie on the 30th November. As script editor during the later years of the original run, Andrew did much to lay the ground for Russell T Davies triumphant return in 2005 and is a key voice in the evolution of the show from ratings also-ran to conqueror of Ant and Dec.

Sunday, 17th November sees a chance to meet the very first director of Doctor Who – WARIS HUSSEIN, one of the men who created Doctor Who in 1963. A BAFTA winner and renowned director, this is the first time Waris has appeared in Manchester and is not to be missed! Waris will also be present at a very special live restaging of his original debut AN UNEARTHLY CHILD at FAB Café. A full cast, live performance of the very first episode from 1963 starring Phil Dennison as the Doctor, this unique presentation is being staged in support of the Alzheimer’s Society and is brought to you by Lass Productions and Scytheplays, the team behind 2013 fringe smash hits V for Vendetta and the Ballad of Halo Jones.

An Unearthly Child runs on the 17th, 18th and 19th November and is performed as a double bill with the follow-up, EDGE OF DESTRUCTION on the 23rd November. Edge of Destruction then continues its run on the 24th and 25th November.

The drama doesn’t end there. Who at Fifty also showcases the premiere of AN ADVENTURE IN TIME AND SPACE; 50 YEARS IN 50 RELS – an anarchic and hilarious celebration of everyone’s favourite Time Lord, brought you by our ridiculously talented ensemble and Manchester Theatre Award winning playwright (and lifelong Who fan) Ian Winterton. Other Doctor Who inspired drama not to be missed includes THE PYRAMIDS OF MARGATE, a solo theatre tragicomedy addressing (alien) life, love, dreams and … Tom Baker which wowed the critics at Edinburgh and NEMESIS – a rehearsed play reading from David Agnew, a bittersweet tale of a couple and how the return of Doctor Who to our screens in 2005 makes an indelible mark on their lives.

Doctor Who has always had a great and British sense of humour at its heart.  The programme even had comic genius Douglas Adams as script editor in the late Seventies! With this in mind, Who at Fifty showcases more comedy than you can shake a Perigosto Stick at! 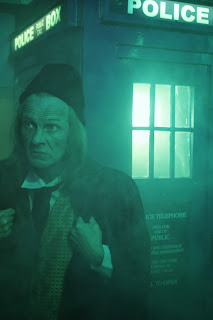 Fringe favourites THE SCOTTISH FALSETTO SOCK PUPPET THEATRE return to the Lass on the 17th November with Socks in Space, their sell-out Edinburgh show with some very special new Doctor Who material to tease us with. They are also joined later that evening by a Doctor Who themed WET FEET special stand-up evening, with Manchester’s biggest Who fan comedians giving their all with MC JOHN COOPER. John is also at the helm for JUST AN EARTH MINUTE – A Doctor Who tinged edition of the Radio Four classic. Stand-up and poet, ROD TAME tells us how Doctor Who makes his life make sense with his sell-out show STRANGE WORLD, ODD PERSON on the 25th November, while fans themselves get to dictate the action in a very special improvised episode of Doctor Who performed by the Comedysportz improve comedy troupe in LET’S SEE WHAT HAPPENS on Saturday, 30th November.

You don’t necessarily need to be an avid fan to take part in the fun?  Thursday, 21st November sees a very special Doctor Who edition of the LASS PUB QUIZ, in association with the Manchester Library Service.  Hosted by ROD TAME with special guest BERNARD PADDEN, who starred as Tylos in Full Circle – a Tom Baker Doctor Who story from 1980, the quiz promises, fun, clips and other interactive treats to challenge the casual fan and hardcore followers of Doctor Who alike.

It wouldn’t be Doctor Who without a few screenings either, and Who at Fifty has plenty on offer.  Monday, 18th November sees a rare 16mm film screening of THIS SPORTING LIFE – the 1963 kitchen sink drama starring Richard Harris and William Hartnell that convinced BBC TV bosses to give Hartnell the role of the Doctor and in doing so, change TV history. The 26th November sees a screening of the David Tennant epic THE STOLEN EARTH while the Lass O’Gowrie will show the big anniversary special – the DAY OF THE DOCTOR on big screens in HD on the evening of the 23rd and drama AN ADVENTURE IN SPACE AND TIME on the 22nd.  Finally, Wednesday THE COBBLES OF DOOM on the 20th at Taurus celebrates the links between Corrie and Doctor Who with an evening of clips and interviews brought to you by the Fiction Stroker and PHIL COLLINSON, the only man to have ever produced both Doctor Who and Coronation Street.