Wizards Vs Aliens, the BBC show from former Doctor Who showrunner Russell T Davies and The Waters of Mars writer Phil Ford, returns next week with Series Two. Below you can find all the details on the upcoming series which starts on CBBC on Mon, Oct 28 at 5pm (with another ep on Tues at the same time) - all stories are two-parters. Details on the finale are not available, as of yet. 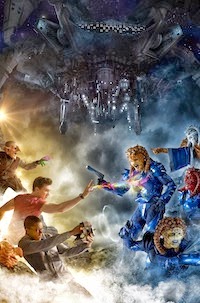 100 Wizards by Phil Ford
Directed by Beryl Richards, also stars Jodie Prenger (I'd Do Anything),  Cyril Nri (The Shopkeeper in The Sarah Jane Adventures, Lost In Time) and Jaye Griffiths (Silent Witness, Sherlock).
Check out the promo pics for the story HERE. Spoiler-free review of the first part HERE.

The Curse of Crowe by Gareth Roberts (The Lodger, The Unicorn and the Wasp)
Directed by Mark Everest, also stars Nina Sosanya (Fear Her), Georgina Leonidas (Katie Bell in the Harry Potter series) and Josie Lawrence (Eastenders).

The Thirteenth Floor by Phil Ford
Directed by Paul Murphy, also stars Jessie Cave (Lavender Brown in the Harry Potter series) and Paul Putner (Little Britain). Fact fans note: this story was originally intended to be part of the fifth series of The Sarah Jane Adventures.

For the latest info, pics and clips on Wizards Vs Aliens, visit HERE.