Colin Baker picks up the 1963 trilogy (continuing from the Peter Davison audio adventure 1963: Fanfare for the Common Men - review HERE) for the second installment; 1963: The Space Race.

Have Big Finish beaten Mark Gatiss to the post on this adventure? In an interview with Blogtor Who earlier this year (check it out the HERE), The Unquiet Dead writer said, “The Doctor Who story I've always wanted to do is about Laika the dog, the Russian dog they put in space…”, and I can see the appeal - as did the writer of this story, Jonathan Morris.

Let's be honest, the Sixth Doctor television adventures weren’t the best and I personally was not a fan of Colin Baker’s belligerent Doctor. However, this audio adventure is surprisingly exciting, if at times out of this world, but that is what Who is all about.

The Sixth Doctor, joined by Nicola Bryant’s Peri, land in Kazakhstan at the height of the Cold War in a time when the Russians have already sent the first animal into space and the first human beyond the Earth’s atmosphere. Now they are planning a manned capsule to orbit the moon. However the capsule’s life support system fails as it passes by the dark side of the moon. 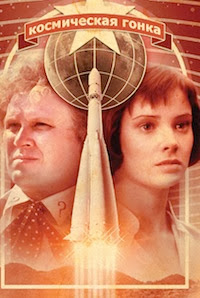 Taking the identities of two deceased Moscow University Scientists, the Doctor and Peri soon find themselves embroiled in a rescue mission. But has their rescuee returned to earth as human as she left?

There is some wonderful voice acting from all, especially Baker - I can't help but think his Doctor is better suited to audio adventures. I also think that the overall casting is pretty spot on. Often the voices can be a tad similar or a voice just does not fit with the character they are portraying; not in this case, making the story wonderfully easy on the ears. And check out the wonderfully subtle incidental music and foley work, great stuff.

One small negative, and it cannot be helped, but it is very apparent that Nicola Bryant is not the young Peri she once was. Part of her character was always an overly naïve and infinitely youthful curiosity and this portrayal is far too independent and mature to be the Peri of old.

However, that wee point aside, of all the Big Finish audio adventures I have listened to recently this is most certainly one of my favourites. A cracking adventure.