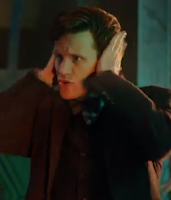 BBC America have announced details of some of their Doctor Who 50th Anniversary celebrations. Aside from airing The Day of the Doctor (Nov 23, 2.50pm ET) and An Adventure in Space and Time (Nov 22, 9pm ET) there will also be Doctor Who Explained, Doctor Who: Tales from the TARDIS and The Science of Doctor Who (which airs in the UK on Nov 16). Check out the full details below.

Doctor Who: Tales from the TARDIS,
An all-new special, Doctor Who: Tales from the TARDIS, features the series’ actors and producers sharing their experiences and memories of the world’s longest-running sci-fi show. The special features exclusive interviews with principal cast members from the show’s 50-year history, including actors who have played the Doctor: Matt Smith, David Tennant, Tom Baker, and Peter Davison, actors who have played companions: Jenna Coleman, Karen Gillan, Freema Agyeman, and William Russell, as well as the current lead writer and executive producer Steven Moffat. The discussion includes how the actors got cast, how the roles changed their lives, how a ‘regeneration’ is recorded, and how filming the show in the 60′s compares to today. Doctor Who: Tales from the TARDIS premieres Monday, November 18, 9:00pm ET.
The Science of Doctor Who
A former rock star and Britain’s popular TV physicist, Professor Brian Cox explores the universe of the world’s favorite Time Lord when he takes the audience on a journey into the wonderful universe of Doctor Who, with the help of celebrity guests. In this exclusively recorded special from the lecture theatre of the Royal Institution of Great Britain, Brian reveals the science behind the spectacle and explains the physics that allows Doctor Who to travel through space and time. Fun, but filled with real science, it’s a special night for Who fans and anyone with a thirst for understanding. The Science of Doctor Who with Brian Cox premieres Monday, November 18, 10:00pm ET.

Doctor Who Explained,
An all-new special, Doctor Who Explained, explores the mysterious and two-hearted alien who is the Doctor. Through exclusive interviews with principal cast members from the show’s 50-year history, including actors who have played the Doctor: Matt Smith, David Tennant, Peter Davison, and Tom Baker as well as actors who have played companions: Jenna Coleman, Karen Gillan, and Freema Agyeman, viewers get an insight to what happens behind-the-scenes of the award-winning sci-fi show. Doctor Who Explained premieres Friday, November 22, 8:00pm ET.

SUNDAY, NOVEMBER 24
Doctor Who – Matt Smith Countdown – 9:00am – 8:00pm ET
BBC AMERICA counts down the top 11 episodes from the Eleventh Doctor, Matt Smith, as voted on by fans.