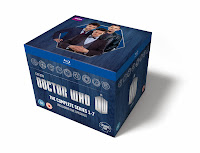 Out now is a 29 disc bluray boxet containing every Doctor Who episode since the restart in 2005 (Series 1 to 7) and also includes 120 minutes of Bonus Material available on disc for the very first time. Series 1 to 4 are available in newly remastered bluray versions at full 1080p resolution for the first time ever, sitting alongside those of the Eleventh Doctor in this high definition collection. Order the set HERE and check out the details below:

BBC Worldwide has gone above and beyond to bring fans the best possible Doctor Who experience, and has also fully remastered the complete Tenth Doctor Specials as well as The Complete Fifth, Sixth and Seventh Series (previously available on Blu-ray), to full 1080p resolution as well. And there's hours and hours of bonus features from the past collections PLUS 120 minutes of bonus material that has never previously been available on disc, as well as more goodies than you can shake a sonic screwdriver at, and this is one blue box that just might actually be bigger on the inside. Buy the Doctor Who: The Complete Series 1-7 bluray boxset HERE, it includes:

The Complete First, Second, Third and Fourth Series
(all new to bluray/1080p resolution)

Doctor Who at the Proms 2010 - Karen Gillan and Arthur Darvill host a spectacular evening of music from the series played live by the London Philharmonic Orchestra at London’s historic Royal Albert Hall.  Includes video projections, appearances by the monsters and a special guest appearance from Eleventh Doctor, Matt Smith.  For the first time, the collection will include the full 90-minute concert and has been remastered in 5.1 Surround Sound.

Doctor Who: The Best of the Christmas Specials - This previously unreleased special from December 2011 takes an inside look at the very best moments from the incredible Doctor Who Christmas specials that have captivated audiences around the world. A collection of fans from the celebrity, comedy, sci-fi and digital worlds discuss their favorite moments from both David Tennant and Matt Smith era Christmas episodes.

Doctor Who: The Complete Series 1-7 Blu-ray Boxset is out now!
Order HERE.
Thanks to BBC Worldwide