Earlier today at the Official Doctor Who Celebration, Blogtor got to sit down with current showrunner Steven Moffat, along with some fellow journalists, and chatted to him about all things Doctor Who.

First up, Steven was asked about a return for Paul McGann after the success of The Night of the Doctor, to which he replied:
"It would be very odd to sell two Doctors at the same time. Who'd go on the lunchbox? Which would be the senior Doctor, which would be the junior Doctor? [Laughs] I think there's a problem with it now. We haven't got plans but I might deceive in order to surprise. Let's see."

On the issue of Christopher Eccleston and his absence in The Day of the Doctor, the writer said:
"I sort of knew that he wouldn't [appear in the special]. I know Chris a bit. I did have a couple of meetings and there was a moment, I suppose, a giddy moment when we thought, 'Would he actually do it?' This wasn't a decision he took in a funk or because he was cross or anything like that. He was very measured, he was very kind, very gentlemanly about it. He's just a good bloke.

If you look at Chris's career, this is not the sort of thing he does. The Ninth Doctor turns up for the battle, but not the party."

Steven shared with Blogtor his thoughts on An Adventure in Space & Time.
"I thought it was wonderful, absolutely wonderful. A beautiful piece of television. I think the thing that struck me most about it when it was finally put together, it's not so much about the recreations of Doctor Who things - which, in the end, is a sort of a stunt - it was the evocation of the period that got to me. That's the world in which Doctor Who was born. That's the story, a show born in a Britain that is pretty much unrecognisable. Yet, that show is still going on."

I wondered if, as a fan, he would like to see Mark recreate these old missing episodes?
"Do it again - the Richard Hurndall years? [Laughs] No, that would be insane Cameron, that really would be insane. No! It hasn't got its bleeding fingernails around credibility! It really doesn't. [Laughs]" 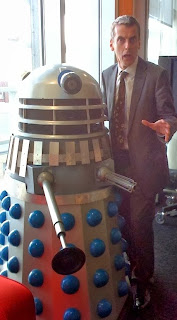 I mentioned to Steven that he stated in a panel at the Celebration that Peter Capaldi could possibly be a grumpy old Scotsman. Is that how you think he's going to portray it?
"No, not particularly, wait and see. He hasn't actually really started, he's done his first little moment and we're working towards that Doctor but it's quite a lengthy process and personally I think it's right to let that process run into the next part of the series as that Doctor finds himself. Matt's Doctor changed quite considerably during his first series and we shall allow Peter to find himself. So saying he's a grumpy Scotsman is a gag at the expense of the grumpy Scotsman talking to you now."

Steven was asked if Peter Capaldi's Twelfth Doctor costume had been picked out yet.
"There is a long standing tradition that that must be done at the heart-stopping last minute. We're working on it and it's his usual thing and it will be fine. I loved it when people used to think, 'Oh look, Steven Moffat has put Karen Gillan in a mini-skirt.' Yeah what Karen Gillan does is say, 'Hey Steven what am I going to wear?' [Laughs]

Obviously, I'm letting Peter and Howard [Burden, Costume Designer] get on with it and yes if they turn up in a multi-coloured harlequin outfit I'm going to say 'No'! [Laughs] But you know Peter has got strong instincts on clothes. It's a funny thing the Doctor outfit, it's completely wrong until it's right and that usually means it's slightly wrong. Matt's just worked when he put that daft bow tie on - which I was totally against - having made that single contribution to that last outfit I thought I'd shut up more.

I then asked Steven if Peter has expressed any interest in directing or writing Doctor Who?
"You know he is slightly preoccupied with a considerable challenge at the moment. I don't know if you could play the Doctor and direct or write an episode, because directing and writing episodes are major, major tasks, that screw up lives and marriages and holidays, and the actor playing The Doctor works their socks off. It's not like any other part, or anything else I can think of. There are no episodes on which you're not major, so I don't know, maybe someday. But right now he's focused on one thing - his life long mission to be The Doctor."


On the 3D aspect of filming The Day of the Doctor.
"Although it was my original idea to do it in 3D, I cursed myself regularly. I was trying to back out towards the end [laughs]. I'd never been a huge fan of 3D, sometimes it makes you feel ill. But Nick [Hurran, director] went to see every 3D movie and concluded there was only one good one, which was Avatar.

Finally Steven was asked how he thought fans will be feeling on Saturday night after The Day of the Doctor?
"Cross. [Laughs] I don't know, I hope they'll be happy. I think they'll be cheering."