Earlier today at the Official Doctor Who Celebration at the ExCel in London, Blogtor sat down with current showrunner Steven Moffat, and some fellow journalists, to chat about all things Doctor Who. Here's what the writer had to say. PLEASE NOTE: This post includes SPOILERS for The Day of the Doctor.

On the return of the Zygons in The Day of the Doctor, Steven commented: "It's not really how you'd do a Zygons story. I think David's [Tennant] always wanted to snog a Zygon [laughs]," adding, "I'd like to use them in a story again, actually."

Moffat was asked if the "future" Doctor's appearance in The Day of the Doctor was always on the cards, he said: "It was the plan from the start. All The Doctors, all The Doctors would fly in to save Gallifrey and change The Doctor's timeline - how could you not do that? I knew there was gonna be a new one [Doctor] so I wrote it with not knowing who would be doing that. We did manage to cast somebody where you can use half his face for less than a second and everybody knows who he is. He looks cross!  It got quite a reaction!"

I asked Steven about the use of two themes from the Russell T Davies era which he picked up on in The Day of the Doctor - Elizabeth I and the Time War. Did he chat with his predecessor about this?
"It's difficult with Russell 'cos he doesn't like spoilers. Even when we worked together on the show we tried not to spoil each other. I did at one point [contact RTD], we had to co-ordinate a bit around some stuff and I did tell him, just because I'm possibly treading on your toes, this is roughly, very roughly what we're going to do. I think he wrote back saying, 'I read half your email and I stopped!'

He did know about Elizabeth I, I love that gag in The Shakespeare Code where that happens. I love it when David Tennant walks out and does a bit about Queen Bess. I thought it was hilarious. And I kept it going in The Beast Below, and I wrote a line into Amy's Choice. To top it off and say that's what she was, a Zygon,  I think is fun. 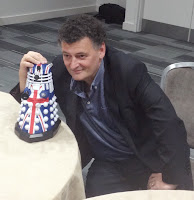 In general, he doesn't want to know. He always gets in touch after an episode airs to enthuse away like a fanboy. In years to come, when it's not me [as showrunner] I'll hand it all over and not want to be spoiled.

I asked if Rusty D had been in touch after The Day of the Doctor?
"He's in touch instantly. Usually the first email or text I get is from Russell.

I asked Steven for his thoughts on Peter Davison's special The Five(ish) Doctors Reboot.
"I loved it. I love it, I'm in it! I'm the villain as far as I can see! [Laughs] Absolutely adorable. It was actually my idea to do that, I had bumped into Peter at a party and he said, 'I'm going to do this little fan video about us all trying to get into the 50th. Do you mind and would you be in it?' And I said I'll give you a budget and a camera crew and some time and why don't you make it for real? Make it for us? It solved a problem for me. I wanted all The Doctor's properly involved, if they were willing, as best they could.

It maximises what you can do with Sylvester [McCoy] and Colin [Baker] and Peter because they're not the same people were, all those years ago. You get to see Colin Baker playing Colin Baker which is much more fun that seeing him trying to do a performance that no longer suits him, frankly. And the same with Peter and the absolutely charming Sylvester McCoy, who is an absolute hero. It was brilliant, I love The Five(ish) Doctors Reboot, it was gorgeous.

Regarding Billie Piper in The Day of the Doctor Steven stated:
"I thought the story of Rose, which was beautiful, was done. I didn't want to add to it, I didn't feel qualified to add to it. That was always Russell's [T Davies] story. The way Russell ended it in The End of Time was perfect. I didn't want to stick another bit in. It would be wrong. 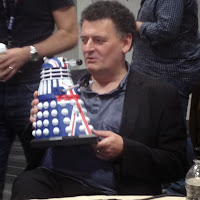 But we did want Billie Piper, one of the absolute heroes of Doctor Who, back in the show without interfering in the story of Rose Tyler. I think I might of spoiled something if I had done that.  Billie represents the revival of Doctor Who, more than anyone else. It's all about Billie, it's her show for two years. It's really startling watching The Runaway Bride and you're going, 'Where is she? Where is she? Where is the star of the show?'

On the 2013 Christmas Special, Moffat commented, "It's a proper finale to Matt Smith, it's the story we've been telling since he put the bow tie on. A lot of stuff we've left hanging, we tie up there. And it's Trenzalore!" At a panel at the Official Doctor Who Celebration, including Matt Smith, Jenna Coleman and Steven, they revealed that the world "bubbly" will appear in the finale for The Eleventh Doctor.

Having seen Peter Capaldi in action as the next Doctor, how did that feel?
"We've only seen the tiniest moment. It's just the beginning of a process really. Of course, he's brilliant. And just seeing the energy and vitality that he brings to his performance, he works - he's like Matt - he works, he's a worker. And he's an extraordinary vital performer. The man is not at all elderly in style, he leaps around the place probably more than any other Doctor in that first scene. But that's not how he's gonna play it, he's in a state of post-regeneration madness. It's something we're still working on.