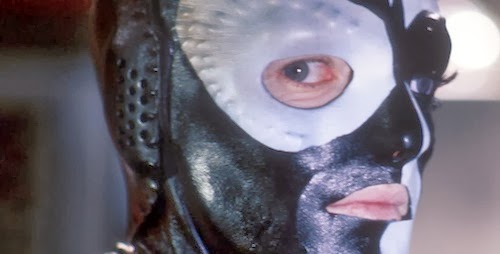 
I'll make no qualms about it, Peter Davison holds a very special place in my heart as The Doctor. Although I started watching when Tommy B was at the helm of the TARDIS (supported by Romana and K9), it wasn't until The Fifth Doctor came along that my true fan heart opened up to Doctor Who.

And whilst his time in the TARDIS was slightly marred by bizarre casting, poor stories and equally poor production values (lights don't always need to be turned up to eleven you know), Davison managed to go out on a high that was never before seen in the show's history.

The Caves of Androzani is that rarity in the Whoeuvre where The Doctor isn't trying to save the Earth (or the Universe), battle an old enemy or solve a crime. He's just trying to get out of a situation, pure and simple. There's no hyperbole but there are plenty of heroics; notably in the manner in which he spends the last episode endeavouring to save Peri.

Peter Davison's swan song has been written about and voted on too many times to make any further comment (and I suspect if you're reading this then you've actually seen it and are aware of its awesomeosity), but that's a testament to the quality of the Fifth's farewell.

With the exception of a few scenes, featuring what can only be referred to as "Bowser", this finale is compulsive viewing, demanding your attention from the get~go. It's a production where, somehow, everybody involved got everything spot on, from the sensational cast (everyone in Caves is memorable) to the two of the most groin~grabbingly effective cliffhangers (episodes one and three, and indeed four if you "count" that) to the exquisite direction from Graeme Harper, which is both gritty and stylish (grylish?).

But, most of all, this is Peter Davison's moment. We get everything from him here: his trademark curiosity at the start; his disdain for violence; humour in the face of adversity; ingenuity; and, of course, his bravery and heroism. The Fifth Doctor's final episode, after he staves off regeneration, has those two characteristics in abundance. Dying, he does his all to save his companion - a true hero.

Newer viewers may be thinking: hold on isn't that similar to The Ninth's Doctor? In fact, even The Tenth? Yes, in a way. Russell T Davies was smart enough to know that a regeneration should be based upon heroism and bravery; The Doctor giving his "life" for a relatively "unimportant" person should be his defining trait.

Tragedy is woven into almost every character in Caves but the Fifth's final words belie an even more heart~wrenching secret - his guilt at the death of companion Adric. In the midst of fearlessness and valor comes the dark honesty of the Time Lord's vulnerability and endearingly fallible nature.

I can think of no better actor to so admirably display all these magnificent characteristics of The Fifth Doctor than "Sir" Peter of Davison.