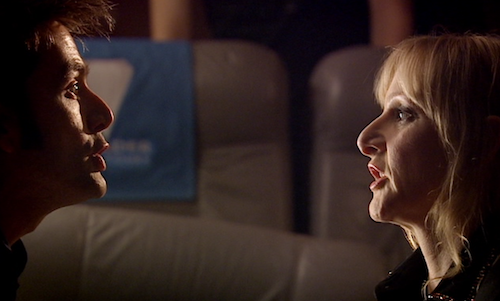 Incredible to think that this episode was a late-in-the-day replacement for another story which was removed from Series Four. Incredible too that, not only was it pretty damn brilliant, it also featured a sensational cast and the most unnerving and downright horrible villains to ever grace Doctor Who. AND it was a "cheap" episode too (in relative terms).

Let's look at that sublime cast first. Heading the guests stars is Lesley Sharp, whose turn as Sky Silvestry is so shockingly terrifying and so brilliantly eerie that one wonders just how this episode would have turned out without her. Sharp goes from fairly likeable holidaymaker to unknown beast with incredible style. Her eye and head work once the "Midnight monster" had entered her are tremendously alien and damn unsettling, Sharp's transformation is electric and commands your eyes with every move she makes.

The actress works superbly with Tennant as they face-off, or rather word-off, with one another; she getting the better of him. It's a performance that both scares and enthralls, and one I could have watched for hours on end.

Her sparring partner, Davey T, is no slouch here either. Russell T Davies removed the two things from The Tenth Doctor that, arguably, define him - his companion (in this case, Donna Noble) and his voice. The Time Lord's verbosity fells him here as his intelligence marks him out from his fellow travellers (a brutal piece of writing from Rusty D).

And, of course, let's not forget the rest of the troupe. Lindsey Coulson, as vicious Val (who I suspect is a Daily Mail reader), is just as much a horror as Sky becomes. "It'll be you next!" she spits atrociously at Dee Dee, leading the group mentality into killing anyone who isn't like her, or shares her point of view. David Troughton portrays Professor Hobbes as a loveable, almost bumbling fool to begin with but his treatment of Dee Dee becomes deeply unpleasant, as does his turning against the Doctor.

All this reminds us that humans can be deeply nasty people, even those who appear to affable and friendly. Russell's observations of gang culture and treatment of the "other" are acutely observed and despite the story's fun start, Midnight does delve deeply into drama and shows just what Doctor Who is capable of.

On the flipside of this, of course, is a very neat base-under-seige science fiction tale. The effects, though brief, are tantalising and truly alien whilst the "monster" of the piece is never seen (or is it...?) but its presence is felt in a most horror-ful of fashions as it bangs on the tourist vehicle. And, like the amazing The Impossible Planet, we never learn the true nature of the threat, The Doctor is left in ignorance just as we are.

Midnight is an episode quite unlike any other of Doctor Who. It scares in much different ways and more effectively than some of the more "famous" scary stories and it does so down to the exquisite writing of Russell T Davies, those blisteringly powerful performances from Sharp and Tennant and a hauntingly disturbing score from Murray Gold. A mindful tale about humanity, loneliness and curiosity. As I say, unlike anything else.