Tom Baker and Lalla Ward are back! 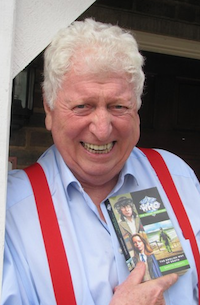 Big Finish, the producers of the Doctor Who audio adventure range, have today announced that Tom Baker and Lalla Ward will be reprising their roles together as The Fourth Doctor and Romana II for a series of audios. Not only that K9, voiced by original voice artist John Lesson, will be joining them too.


The trio will make their Big Finish debut together in January 2015, with the launch of a limited edition box set called The Fourth Doctor… by Gareth Roberts (also available as separate double disc releases). Roberts, currently working on Wizards Vs Aliens, also wrote such brilliant Doctor Who stories as The Unicorn and the Wasp and The Lodger (and also some amazing instalments of The Sarah Jane Adventures).

The stories being adapted are  The Romance of Crime and The English Way of Death whilst Big Finish also hope at a later date to adapt Gareth’s novel The Well Mannered War, thus completing his trilogy of Fourth Doctor novels. For more details, visit their website HERE.

And that’s not all…. Tom, Lalla and John have already started recording season five of The Fourth Doctor Adventures, which will be released in 2016. The run of eight stories will take them to 1960s London, Budapest, alien worlds… and complete a story arc that started some time ago. For more details, visit their website HERE.