Dark Eyes 4 is the latest and final part in The Eighth Doctor Dark Eyes series that takes Paul McGann’s incarnation in a new direction as we see him pushed to his limits and go on the journey that takes him towards the Time War and his eventual departure in The Night of The Doctor. After holding The Master at bay, but losing his companion Molly O’Sullivan, The Eighth Doctor and Liv Chenka are searching for the titular dark-eyed Irish WWII nurse who is somewhere and somewhen on Earth.

Big Finish have brought together their two strongest writers, Matt Fitton and John Dorney, to bring this franchise to a deservedly satisfying and varied end. The pair bring their own individual talents and collaborative strengths to create one of Big Finish’s best releases to date.

1. A Life In The Day by John Dorney

The Doctor and Liv return to post-World War One London, where he meets Kitty Donaldson (played by Beth Chalmers), and Liv strikes up a friendship with her brother Martin. But what mysterious force is hunting them?

This story takes the form of a kind of Groundhog Day from the perspective of the other people who aren’t living the same day over and over again. This is an uncharacteristic start for Dark Eyes 4; wildly silly, wonderfully enjoyable and has an incredibly sad and bittersweet ending.

It’s great to hear Nicola Walker as Liv Chenka performing opposite her real life husband Barnaby Kay as Martin, this genuine chemistry comes through beautifully even on audio. The story takes on an enjoyable structure as Liv and Martin hop from place to place on a kind of date out and about in Twenties London while The Doctor and Kitty run the gauntlet trying to catch up to them and just missing them at every turn.
10/10

2. The Monster of Montmartre by Matt Fitton
The Doctor and Liv’s investigations bring them to Paris, where a monster stalks the streets and a certain infamous nightclub is at the heart of the problems.

This idea is so bizarre it’s fantastic. This story is so beautifully atmospheric, the soundscaping of Paris is achieved beautifully. I’m glad I didn’t look at the cover for this story, as the reveal that the monster is a Dalek, was wonderfully delectable.

Rachel Stirling (The Crimson Horror) is excellent as Madame Dutemps the schemer and leverager of Parisian artists abilities. It’s a little far-fetched that the Daleks we know and love would come up with a plot like this one, but the Daleks of this story aren’t anything like those we’ve known before.

The Monster of Montmartre is an enjoyable story, and could have been tangential but it’s here where we finally learn the truth about Molly’s "Dark Eyes" and their relevance to the series.
10/10

3. Master of The Daleks by John Dorney

The Master and the Dalek Time Controller have forged an alliance. History hangs in the balance, and this time The Doctor can’t help…

The Doctor is largely absent for this story, but that’s fine as we finally get to see an alliance between The Master and the Daleks play out - and the Sontarans are also thrown in for good measure! Nicholas Briggs is clearly revelling in his performance as the pepper pots, who feel fresh here and Alex MacQueen is, as ever, charmingly evil as The Master.

The Sontarans are a little underused, however it feels like this is only a consequence of the two former villains beings so on form.
9/10

4. Eye of Darkness by Matt Fitton
It’s the endgame. Truths will be revealed, and a hero will make the ultimate sacrifice.

This story starts with a bang and doesn’t relent until the very end. It’s set in the familiar Doctor Who locale of the peaceful Eye of Orion. In this case, at a sort of benevolent intergalactic charitable sanctuary for war refugees. However things are can’t be as good as they seem, can they? 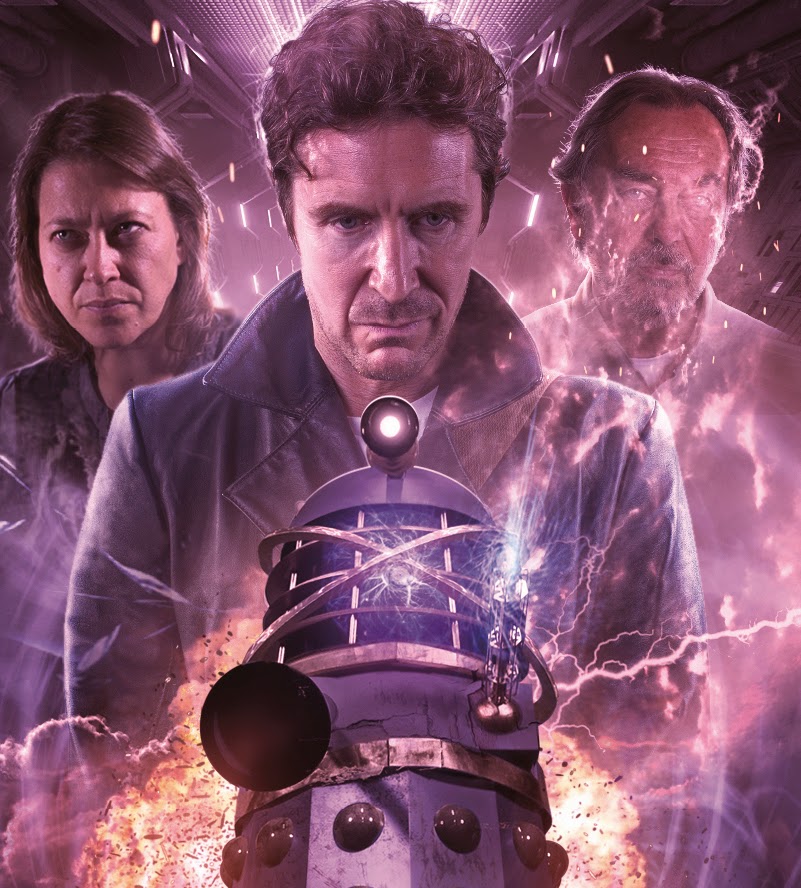 The story features the Daleks again in a big way and we finally get to see a missing piece in the timeline of original Big Finish baddies, The Eminence. Sorcha Cusack is wonderfully nuanced as Mary, an old Irish nurse at the Eye of Orion base, and the final scenes are heartbreaking.
9/10

The assembled casts for each story are just brilliant but it it Paul McGann as The Doctor who deserves the biggest praise. He is at the top of his game in these stories and I can’t wait to see where the character goes next.

Overall, Dark Eyes 4 is excellently varied and a more than satisfying end to the series. Now to go back to the top and start listening all over again.

BLOGTOR RATING 10/10
Thanks to Big Finish