Forgotten Lives is the third part of the new Big Finish series of Torchwood adventures and this time it’s the return of the indomitable Gwen Cooper and husband Rhys Williams.

Unlike the first two Torchwood stories, Forgotten Lives doesn’t step back in time, but is set five years after the Miracle Day series. Jack has been missing for years and Gwen and Rhys are living a normal life when they receive a strange phone call from the Bryn Offa nursing home in North Wales.

Fall To Earth, the Ianto-centric second episode in this series, was always going to be a hard act to follow and, while it’s lovely to have Gwen and Rhys back, it’s sad to say that Forgotten Lives doesn’t quite do the job.

The story starts off well as Gwen and Rhys call in to the hitherto unknown Wrexham Bypass branch of Torchwood before going to the suitably strange setting of the nursing home where they meet an old man who claims to be Jack and who knows an awful lot about Gwen, Rhys and alien tech.

The "baddie" of the piece is an alien race called The Evolved, who seem to be putting people’s minds into other people’s bodies. There are links here - some necessary, some probably not (irritatingly so) - to the ongoing story arc involving the mysterious and sinister Committee of Erebus and the Three Families behind The Miracle. The concept of The Evolved and the reason for this mind swapping is really rather clever and it’s particularly well thought out, if a bit confusing and somewhat creepy (and again, irritating) in its delivery. 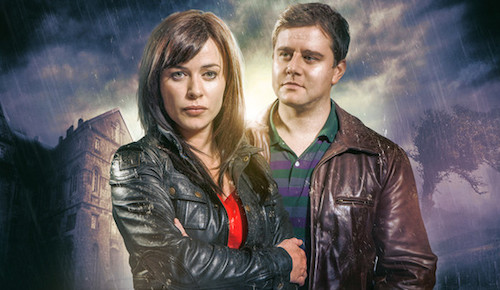 The story becomes slightly saggy in the middle, but thankfully it notches up the excitement and some genuine horribleness (I was shouting “NO! NO! NO!” loudly enough to cause concern from those around me at one point) as the tale unfolds.

So how does the latest batch of Torchwood characters do in returning to the world of keeping the world safe from alien menaces? Eve Myles and Kai Owen step back into the shoes of Gwen and Rhys as if they’ve never been away. Gwen is a no-messing fighter, Kai brings some shockingly potty-mouthed comic relief, and they both bring a huge, huge amount of heart.

To be fair to Phillip Bond, who plays “Jack” as well as elderly care home resident Mr Griffith, the Jack in this story is a bloody idiot and, frankly, pretty annoying at some points. Bond doesn’t quite manage to pull off Jack, and his accent is madly inconsistent, but he does do a lovely job playing Mr Griffin.

But the absolute star of the piece is Seán Carlsen as prissy care home manager Gary, and Forgotten Lives is a better story for having Gary in it. Gary has been hit, spat at, and accused of all kinds, but still loves his job and the people he cares for. He’s a beacon of human goodness in sharp contrast to the sanctimonious aliens he finds at his care home.

It’s worth noting the music and sound effects in Forgotten Lives. Blair Mowatt plays with the Torchwood theme in a beautifully melancholic way, and the sound effects, evoking the rain-lashed North Wales countryside, were so convincing that I was reaching for my big coat and my sou'wester.

Forgotten Lives ends with Jack still missing, but with Gwen and Rhys ready to start up Torchwood again. Which, if this series so far is anything to go by, can only be a good thing.

BLOGTOR RATING 6/10
Thanks to Big Finish