Fresh off the back of a cracking Doctor Who Christmas special, we get the first incarnation of Professor River Song’s own spin-off series, The Diary of River Song. The idea for this new series actually comes from showrunner Steven Moffat, who suggested and authorised the team at Big Finish to use the character and have her interact with earlier Doctors. And what an exciting prospect is that?

The series is broken in to four parts:

The Boundless Sea by Jenny T Colgan
River has immersed herself in early 20th century archaeological academia, but when a mysterious tomb is found in a dry, distant land, excitement comes looking for River. Can Professor Song stop any more members of the expedition from dying?

This feels like the perfect place to start, with an archaeological dig. As our protagonist is an archaeologist after all. Kudos to Jenny T Colgan who is the first writer to get her hands on River Song after Steven Moffat who up until now has penned every story featuring the Doctor’s long time beau. Colgan totally gets the character and does a great job establishing the River in her own world.

I Went to a Marvellous Party by Justin Richards
Our curly-haired archaeologist always enjoys a good party, even when she’s not entirely sure where or when the party is taking place. But the party she ends up at is one where not everything – or indeed everyone – is what it seems.

Wonderfully different to its predecessor this story’s setting is the perfect environ for the character of River Sing to flourish. 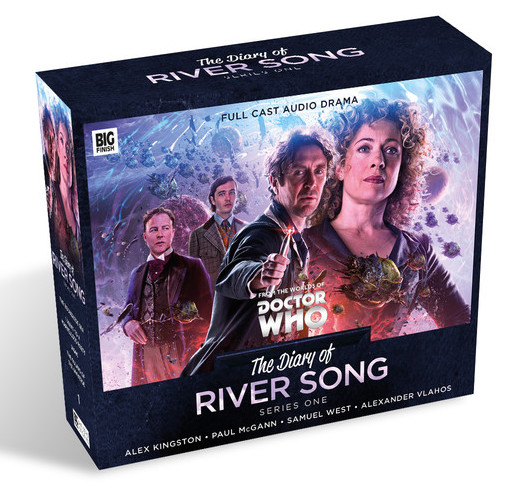 Signs by James Goss
River Song is on the trail of the mysterious, planet-killing SporeShips. Nobody knows anything about them aside from wherever these ships appear, whole civilisations are reduced to mulch. But River has the help of a handsome time-travelling stranger.

The clear jewel in the Diary of River Song’s crown. This largely two-hander is fantastic. Samuel West  (who older readers may remember made a star turn in the classic multi-Doctor outing, Dimensions In Time) turns in a top rate performance as Mr. Song and the chemistry between these two characters is palpable. This story is worth listening to over the rest. From the bonus material included with the release, West confesses to having a deep desire to play the Doctor; something that this reviewer would now really love to see.

The Rulers of the Universe by Matt Fitton
Out in deep space, a clandestine society faces off with an ancient and powerful alien force. But for River there’s an added complication. The Eighth Doctor has been caught in the middle, and she must make sure her future husband can arrive at his own destiny with all his memories, not to mention his lives intact.

Writer of this part of the story, Matt Fitton, also script-edited the whole piece and his expert hand can be seen all over this excellent adventure. The relationship between River and the Eighth Doctor is beautifully handled. It’s great to listen with the knowledge that the Doctor mustn’t know or see River. The chemistry is there and, as a listener, one can really appreciate that Song knows who this man is and what their future will hold, but the Doctor is totally in the dark. This story perfectly rounds off this fantastic new production.

The chosen diary style format feels like the best possible direction to take this wonderfully fresh new outing from the ever growing Doctor Who audio giant Big Finish. The structure crops up concurrently throughout the release, but never overwhelmingly or to the piece’s detriment.

All in all, The Diary of River Song feels legitimate, and in turn, acts to further legitimise the short-lived televisual Eighth Doctor’s character too. It is evident from Alex Kingston’s performance that she is clearly hugely connected to and invested in her character.

Once again Big Finish’s relationship with the current embodiment of Doctor Who on the television grows and grows. The quality at Big Finish has always been present, but seems to be on a real role currently and is beginning to reach out in wonderful and exciting new directions.

BLOGTOR WHO RATING 9/10
Thanks to Big Finish