As the news begins to come thick and fast regarding the return of Doctor Who, some juicy news nuggets regarding the series may have gone unnoticed. Here at Blogtor Who, "we" refer to the remaining episodes as Series 6, Part 2 (starting with Episode 8, Let's Kill Hitler). You can listen to a special podcast HERE, where Blogtor and audio commentary chum Alexander J McKinnon discuss the new trailer.

You may have noticed the episode sections over to the right (no, your other right) have been updated with the latest titles. Blogtor tries not to post spoilers (unless clearly marked) but if it's spoilers you're looking for, check out Doctor Who Spoilers HERE. Included below are posts relevant to Series 6, Part 2.

THE WEDDING OF RIVER SONG
SteeMo is back to pen the finale that seems to feature some familiar faces in unfamiliar roles (watch a video report HERE, spoilers!). It stars Mark Gatiss, Simon Callow (Charles Dickens in The Unquiet Dead), Simon Fisher-Becker (Dorium Maldovar) and Ian McNeice (Winston Churchill) and includes the lines, "I don't want to marry you," and "I don't want to murder you."

From the Radio Times preview:
"We have Minis suspended by air balloons, pterodactyls attacking school kids, a train emerging Magritte-like from London’s Gherkin building and Charles Dickens (Simon Callow) discussing A Christmas Carol with Bill Turnbull and Sian Williams on BBC Breakfast. Add to that Winston Churchill hailed as Caesar in present-day London and the Doctor shambling about like a bearded apostle. And all this in the first few minutes. "

The episode features The Doctor playing a game of "Live Chess" in front of an audience whilst he also comes face to face with a Dalek. It has a running time of just over 45minutes. Curiously, the episode of Doctor Who Confidential that accompanies this episode is titled, When Time Froze.
Audio commentary
What did YOU Think?
Two clips
Four new images
Promotional pictures
Doctor Who Confidential - preview videos
BBC Radio ad
Prequel
Next Time trailer
Mark Gatiss stars
Episode synopsis
NBC Today set visit [SPOILERS]
Mark Gatiss in the Series 6, Part 2 trailer?
Episode 13 title revealed 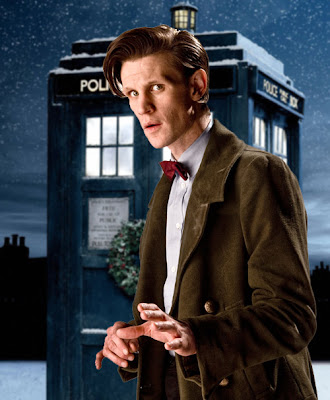 SERIES 7 (2012)
Filming begins in February and will be broadcast in the "Autumn" according to Doctor Who Magazine 439. Mark Gatiss has confirmed he is writing a story, including the words, "meat", "klaxon" and "Vienna". Steven Moffat has stated The Ponds are leaving with Gillan adding she is filming a few episodes.