"The Doctor is going to meet someone very new
in the very last place he could ever have expected..." 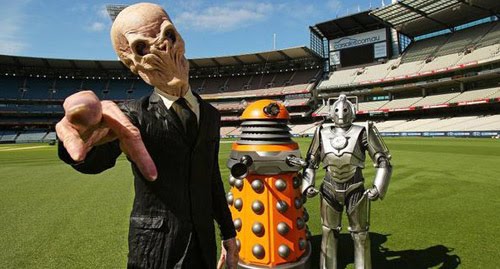 Reader Jason Murray has very kindly sent in some information from the Melbourne Symphony Orchestra Doctor Who Symphonic Spectacular programme regarding Series 7. Current showrunner Steven Moffat has penned a foreward which teases details about the next companion, check it out below:

Doctor Who's 50th anniversary is coming. In Cardiff, we're gearing up for the biggest, the best and the most ambitious season we've ever made. There will be shocks, surprises and heartbreak - the Doctor is about to say goodbye to his very best friends, Amy and Rory.

And then he's about to say hello to someone very different - the Doctor is going to meet someone very new in the very last place he could ever have expected...

Special thanks to Jason Murray
10 Actresses Who Should Be The Next Companion
RECENT POSTS
50 Things For The 50th! [Part 2]
Alex Kingston on The Graham Norton Show
John Barrowman on The One Show
Matt Smith Proposes to Girlfriend at Doctor Who Experience
DVD News: Nightmare of Eden